Published by History Nebraska, distributed by University of Nebraska Press

Even a moment is enough for wonder and curiosity. Each page of this book uses a photo or artifact to tell a true story about the past, drawing from the extensive collections of History Nebraska. You can read it straight through, but it’s written to be browsed. Here are the turning points, disasters, amusements, causes and controversies, changing technologies, and scenes of daily life of the people who lived in a Nebraska that sometimes seems familiar to us, and sometimes seems a world away.

(I wrote this as an employee of History Nebraska. I know the “About” box at right says this site promotes only my personal projects, but I’ll make an exception for this book, sales of which support History Nebraska.)

Flight to the Top of the World: The Adventures of Walter Wellman 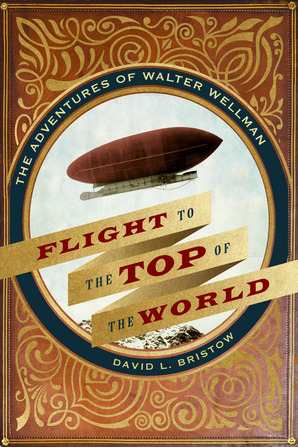 Published by University of Nebraska Press

In his day Walter Wellman (1858–1934) was one of America’s most famous men. To his contemporaries, he seemed like a character from a Jules Verne novel. He led five expeditions in search of the North Pole, two by dogsled and three by dirigible airship, and in 1910 made the first attempt to cross the Atlantic Ocean by air—which the self-styled expert on aerial warfare saw as a mission of world peace. He endured hardships, cheated death on more than one occasion, and surrounded himself with a team of assistants as eccentric and audacious as he was. Read more.

Published by Farrar, Straus and Giroux

“Take aeronautics back, back, back before space shuttles, moon missions, airplanes, and dirigibles, and you arrive with Bristow at the late eighteenth to early twentieth century heyday of tethered and free-floating balloon flight, with its fearsome novelty and peculiar perils… this is an inviting title for kids making their first ascents into longer works of nonfiction.”  —Bulletin of the Center for Children’s Books (starred review) Read more.

Now in its fourth printing from Caxton Press. Read an excerpt at Google Books.

Harper’s Magazine advised travelers to go around it.

Rudyard Kipling was both fascinated and appalled by it.

A newspaper in Kansas City found it a “fitting subject for the prayers of a nation.”

But scores of settlers, bullwhackers, gamblers, politicians, and con men saw the future in it. And somehow, almost in spite of itself, Omaha, Nebraska, grew from a speculative scheme in 1854 to a booming city by the turn of the century. Along the way, it generated scores of great stories, some of which I tell in this book. All the stories in the book are true—they only read like fiction. Read more.

I’m an author, historian, and editor of Nebraska History Magazine, a quarterly journal published by History Nebraska (formerly known as the Nebraska State Historical Society). This site mostly promotes my personal work and is not affiliated with HN.